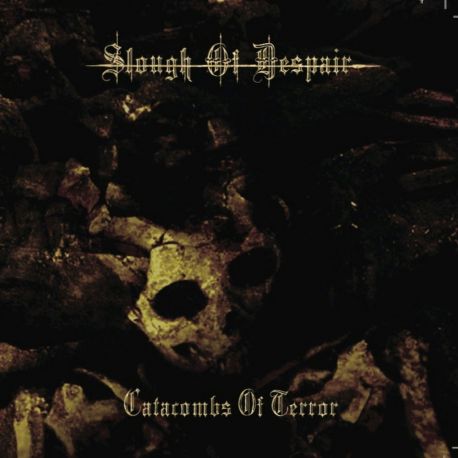 Hailing from Athens, Greece, Slough of Despair formed in 2018 after guitarist Panos L. split from Ordeal and began to write the first demo with vocalist Babis G. and drummer Dimitris S. Later, Kostas V. took over on vocals, and the band was fleshed out with second guitarist Giannis T. and bassist Nick C.

With their lineup thus complete, Slough of Despair recorded their debut album in January 2020. Aptly titled Catacombs of Terror, this seven-song/42-minute monolith is suffocating to behold. Devastatingly crushing whilst eerily atmospheric, Slough of Despair uphold their moniker through an ominously lumbering, oft-ritualistic strain of doom-death. Its pound-and-plod is rendered in richly analog tones, robust in their clarity yet never losing any inherent rawness; more to the point, you FEEL this dark density deep within your soul. Then, ripping that soul asunder, Slough of Despair mesmerize with malevolently melodic twists that take their time to develop, but deliver a bountiful payoff. Patience thus rewards those willing to step fully into these Catacombs of Terror.

Originally released digitally in April 2020 and then on limited-edition cassette a few months after, Catacombs of Terror will at last see a CD release through a joint collaboration between Mexico's long-running Chaos Records and Personal Records, the new label imprint of Majestic Downfall mainman Jacobo Córdova. This is literally titanic doom-death highly recommended for maniacs of Asphyx, Necros Christos, Winter, Cianide, and Evoken.