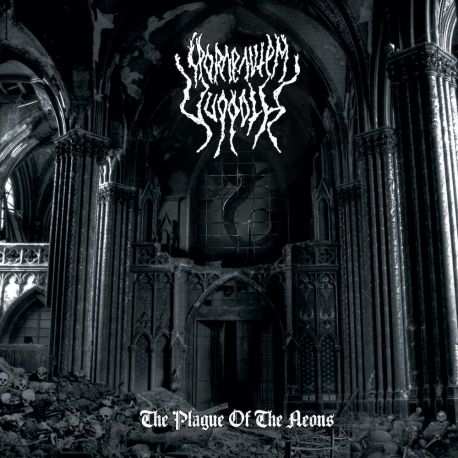 Sporae Autem Yuggoth "The Plague Of The Aeons" (MCD)

Formed in 2019 in Santiago, Chile, Sporae Autem Yuggoth are a new band with an old soul. Cultists of ancient styles, Sporae Autem Yuggoth deliver unremittingly dark and unapologetically primitive death-doom spawned from the cauldron of the classics. The quintet delivered their debut recording, the four-song/30-minute The Plague of the Aeons, first digitally in early 2020 and then on limited-edition cassette format not long after. An auspicious start to say the least, The Plague of the Aeons moves at brisker pace than much death-doom, twisting and turning to tempos that range headbanging marches and deep-in-the-abyss sludge alike; the songwriting fittingly takes treacherous detours and evokes unsettling atmospheres. Similarly, while Sporae Autem Yuggoth's riffing is doubtlessly crushing, there's equally an acute sense of space being explored, the band able already to span startling extremes; one could even liken their tuning to rock 'n' roll, relatively speaking. But, death and darkness eternal rule supreme here, and The Plague of the Aeons establishes that fact with no uncertainty during its generous playing time.

Even at this early stage, Sporae Autem Yuggoth have etched out a strong sense of authenticity and identity, and hereby will Personal Records release the band's as-yet-untitled debut album later in 2021. Take the first step into their slimy crypt!