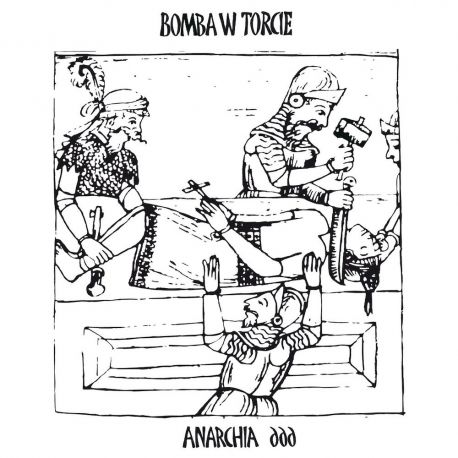 If you feel crushed, killed or otherwise insulted. If there is chaos and destruction in your head, if you've lost control of your body (or your eyelid is fluttering)… Don't worry, "Anarchia666" will free you from this situation. You will be filled with a vivacious anarchist mood, and revitalizing neutrinos of energy will put you back on your feet. The deformation will disappear and your scarred head will regain its splendor. You will become like new, as if you had jumped into the past or the future, where not only your condition impresses, but you actually feel fantastic... And as the words can't really express it all, you play A666 again.‬
BOMBA W TORCIE (bomb in the cake) was created around 1795 (mid 90's) as a side project of STUCKONCEILING, a completely obscure ensemble, both then and now. After 2-3 years they rebuilt their guitars and drums (the baroque guitar was too quiet and too delicate). At the end of 1897 BWT recorded its first but – as the story will show – not last album.‬ ‪This album, however, was to wait another 101 years for its release – first, Fakir was born in the 20th century, and secondly, he founded Enigmatic Records after some time.‬ ‪In this context, waiting 20 years for a re-edition, as well as the first CD release by SELFMADEGOD RECORDS, is next to nothing.‬
BWT music is a diverse hard core with distinct death metal and grindcore elements.‬ ‪It's more a synthesis than a combination of styles.‬ ‪Juicy precise guitars, overdriven bass, frivolous but heavily loaded percussion, and finally "that" vocals, tenor and soprano in sophisticated modulations.‬ ‪Hurricane pace, passionate slowdowns, wild rhythmic adventures.‬ ‪A666 consists of 11 different pieces that merge distinctive expressiveness and spontaneity.‬
(It is not a secret that the first oral accounts of this music appeared in the late 1950s, for the band to become a legend and favorite subject of reflection on the future of radical rock. Perhaps it does not make sense at all, but today one may wonder what impact A666 had on bands such as REPULSION, NAPALM DEATH, RORSCHACH, TERRORIZER or BRUTAL TRUTH).‬
The lyrics of A666 are filled with stories of the adventures of the band members: Jondro Perkoz, Partner Sowy, Kładziw Stiwens, and Rurokura. The group is guided by Doctor Jelito (Doctor Gut), philosopher and inventor of ideas.‬ ‪His creative and penetrating mind brings absurd realism as a solution the world needs like never before.‬ ‪Mission, plan, prophetism, as well as fantasy and impetus are the main features of this radiant pact.‬ ‪Cyborg, Black Anarchist, Punk The Soothsayer and Antichrist are archetypes of heroes whose stories can move us even now, and the Doctor is a completely secular prophet, and also a savior.‬