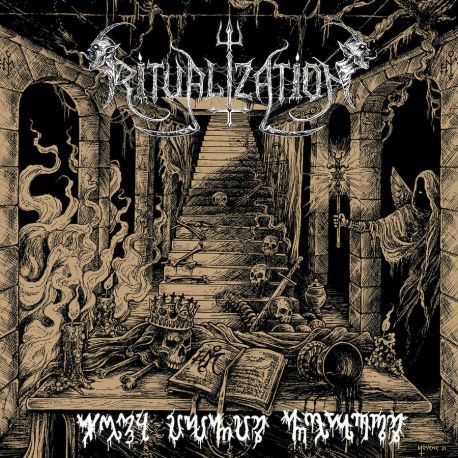 It's been five long years since RITUALIZATION's widely acclaimed debut album for IRON BONEHEAD, Sacraments to the Sons of the Abyss. While most of the lineup has stayed intact, new vocalist/bassist Daethorn arrives from Merrimack, who's very much a fellow French underground veteran like his bandmates. Together, the quintet deliver a three-song firestorm of epic proportions in Hema Ignis Necros.

Indeed, "epic" is an apt descriptor for this three-song/26 mini-album, as the nuclear-powered bestiality of yore - channeled from death metal's most infernal depths, as practiced by the elite lineage of Angelcorpse/Perdition Temple, Centurian/Nox, and Ravager/Hacavitz - is welded to winding, barbed-wire complexity of songcraft. Sharpened like a gleaming blade, their sulfurous ultraviolence is finessed to an exceptional degree, with terror and tension lurking in the record's more reposed moments. It's a statement of intent, to be sure, and one that proves that serious blackened death is still worth reckoning.

RITUALIZATION may have been away for some years, but on proof of Hema Ignis Necros, their commitment to the faithful tradition of what death metal must be is forever firm. Detonate & desecrate!