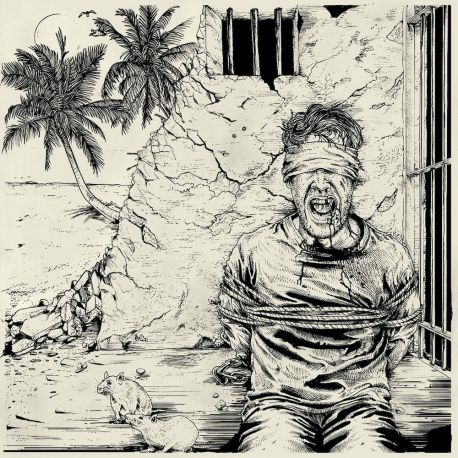 Grind your mind to pieces with 8 crustpunk-ridden eruptions of power by three of Europe’s most ravenous and ferocious grindcore bands: PSYCHONEUROSIS, HERIDA PROFUNDA and SUFFERING QUOTA. Combining their strengths and showing grindcore’s versatility in a total of 8 songs. The 3 way split, subtitled “In Fear We Trust”, is released by a coalition of grindcore labels worldwide on cassette and CD on the 6th of December, with vinyl to follow in early 2020.

For “In Fear We Trust”, PSYCHONEUROSIS recorded a cover of Extreme Noise Terror’s song “Believe What I Say”. In addition to that they added the previously unreleased, full on grindstomper “Where Are We Heading”.

HERIDA PROFUNDA’s tracks were recorded live at 161 Festival in Poland. Three of the four blistering, unadulterated grindcore tracks will eventually be recorded for a 2nd full-length but are released in their purest form to give a taste of what to expect in the future. The studio version of “Alerta 161”, previously released on their split with Hellbastard, was added as a political statement.

The tracks on this split from SUFFERING QUOTA were recorded during the same session as the songs on the split with My Minds Mine. “Rage” is an alternative version of the song “Anger” that appeared first on their critically acclaimed, sophomore album “Life in Disgust”. “Bastardized Yesterday” shows a development to longer songs with more elements of death metal and hardcore that was further explored on “Life in Disgust”.