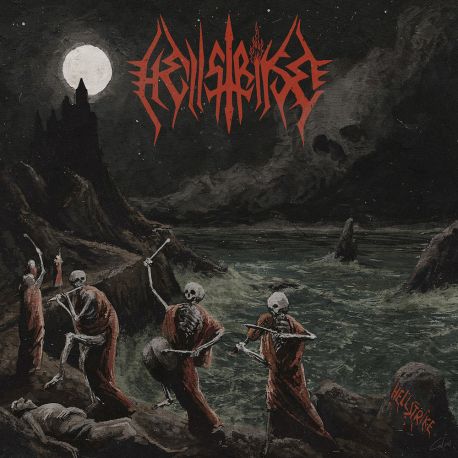 Featuring members of Ascended Dead, Ritual Necromancy, and Bloodsoaked among others, HELL STRIKE is a new band with an old sound. The idea of HELL STRIKE started like most bands: it was at a metal show where Charlie Koryn, Johnatan Quintana, and José Luis Rodríguez met and talked about jamming some old songs. Even though the members are spread between Seattle and Portland, the distance wasn't an issue, and rehearsals started at the end of 2017.

The next year, HELL STRIKE had a handful of practices, but every trek was always a productive one. Just around then, Jon Reiner joined the band, and a few more practices took place. Then, mid-2018 saw a long hiatus due to the schedules of the members' other bands, and it wasn't until December 2019 where the songs they'd been working on finally got recorded.

At last, that recording emerges as a six-song/24-minute mini-album: Hellstrike, essentially a self-titled record of sorts. Here, HELL STRIKE surge and crunch with eldritch energies, back when the cauldron of extremity was slowly stirred between death metal and black metal. More specifically, the mini-album stands firmly on a foundation of early 2000s black/death and early-to-mid '90s death metal, recalling the likes of Sadistic Intent, Grotesque (Sweden), The Chasm, Necrophobic, Mortem (Peru), and Order From Chaos among others.

Familiar yet foreign at the same time, Hellstrike is indeed a gnarly first strike for HELL STRIKE!