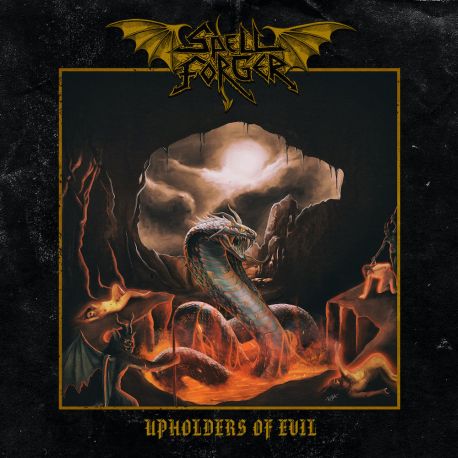 Hailing from Indonesia, SpellForger began early 2020, highly influenced by early proto-black metal such as Celtic Frost, early Slayer, Bathory, Possessed, and also modern black metal-influenced thrash metal bands such as Cruel Force, Deathhammer, Condor, and Inculter. And since most of the members are a huge fans of the old-school style of death metal, SpellForger's music also bears some slight '90s death metal influences, as well.

SpellForger was formed by Demi Raldi (AKA Middernacht), and then he also invited a close friend named Jamie (AKA Carrion), who is also guitarist in the black metal bands Ashtarothum and Neurotic of Gods. Together, they then invited a veteran black metal drummer named Yaya (AKA L. Tchort), who has been involved in the black metal scene since the mid '90s. Some time after, SpellForger was finally formed, with Middernacht recruiting a friend named Fauzan (AKA Horrifier) to fill the position of bassist even though his real skill is playing drums.

A few weeks after the band had formed, SpellForger started to write their first single, "Pestilentia," and it was recorded three weeks later without any rehearsal. The song is widely well-received with black/thrash fans, with some viewing the band as giving a new, fresh injection into their local metal scene - this because Indonesia (in this case, Bandung) is widely known for its huge death metal scene, mainly focused on the brutal/slam style, which has largely been overdone. Instead, SpellForger wanted to revive the spirit of old-school metal within their local scene, bringing a strong anti-poser attitude in their music and lyrics. The band are also against any other sort of trends that've been going on for quite some time within that local scene.

And this is just the start for SpellForger. The future is wide open to destroy, so prepare for these Upholders of Evil or get out of their way!