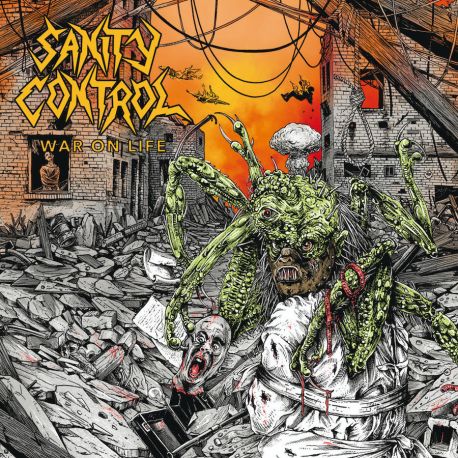 Warsaw crossover lunatics Sanity Control assault the state of this wretched world with their debut full length, War on Life! Loaded with eight rounds of hardcore infused thrash to decimate your senses, War on Life grooves with the right amount of hooks coupled with heaviness whilst also demonstrating a keen understanding of how to utilize the riff to pummel the listener. This album is an instrument of destruction and a screaming voice aimed at a broken system. Lyrically and conceptually focused on turning an eye onto the devastating state of the world today, Sanity Control encourage you to lose your mind willingly in the organized chaos of their combustible crossover universe. For those who worried Thrash was doomed to a future of retro cosplay, Sanity Control advise you to lay down your body and join the War on Life.

Sanity Control is a Crossover/ Thrash Metal band from Warsaw, Poland, who pay homage to the classic Thrash Metal bands while blending it with a distorted and aggressive hardcore punk attack not unlike the great Crossover bands before them - Broken Bones, MOD, and Crumbsuckers to name a few. Their lyrics cover various social issues and embody a geniune hardcore/punk attitude. Seeing Red Records are proud to team up with Selfmadegod Records to unleash Sanity Control's debut album, War on Life, to the world!

A must have for fans of BROKEN BONES, MOD, CRUMBSUCKERS, MUNICIPAL WASTE, CRYPTIC SLAUGHTER.