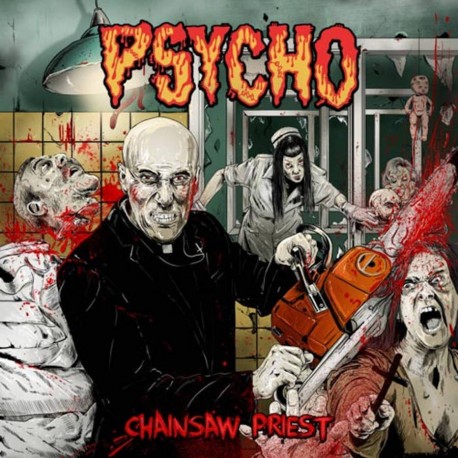 Old-school Boston grindcore/punk act, PSYCHO, is back with the band’s first new full-length release in over twenty-two years!
New England scene veterans Johnny X, Charlie Infection and Mike, return with “Chainsaw Priest”, the fourth PSYCHO album amidst the band’s extensive discography. Cranking out seventeen new tracks in under twenty-nine minutes, this is fast and fierce grindpunk of the stripped-down, frantic variety. Diehards of other legendary grind acts including AGATHOCLES, S.O.B., BLOOD, UNSEEN TERROR, UNHOLY GRAVE and ROT can’t miss out on “Chainsaw Priest”!

PSYCHO has been shredding their way through the population since 1981. Formed as a punk band, the material simply grew faster and more extreme until it became the high-speed grind/thrash mutation their extensive discography of EPs, splits and albums reflects, never following current trends nor trying to make it sound technical. The band’s discography stretches back to 1983 with the release of their debut 7” EP. Three years later they released their debut LP, Hosebags From Hell, and two years later the follow-up You Love Us... You Hate Us...LP. Several EPs and splits with Anal Cunt, Agathocles, Meat Shits, Out Cold, Rot, Nasum and more would drop throughout the '90s. After a twelve year stretch of silence, in 2008 PSYCHO released a double LP collection of early studio recordings as well as a self-titled CD/DVD. Selfmadegod released their The Grind Years compilation CD in 2010, after which the band dropped two limited 7” EPs before setting up to record their first new LP in over two decades, Chainsaw Priest.