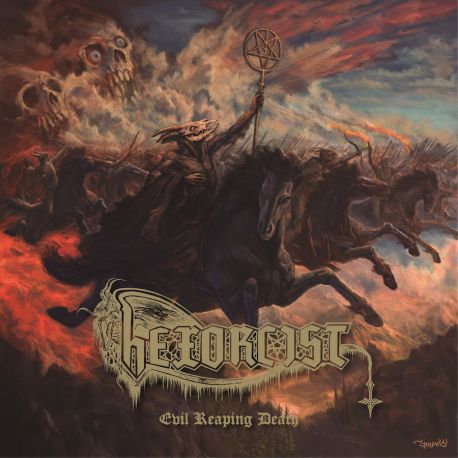 Unearthed in Florida in early 2019 and comprised of past and current members of other impious hordes such as Gnosis and Devastator, Hexorcist summon old-school and blasphemous death metal that may as well fall under the "proto-death metal" category, for their ferocious and relentless approach to the genre harkens back to the mid-to-late '80s, when all things extreme were still boiling in the same malignant cauldron and all boundaries were nothing but a blur that no diehard dweller of the underground gave a damn about. Hexorcist's aural and lyrical offering is uncompromising and exudes utter vileness, leaving no room for absolutely anything that could remotely be considered modern or trendy.

And Hexorcist accomplish precisely that on their scathing debut album, Evil Reaping Death. Ridiculously accurate in its title, Evil Reaping Death is exactly EVIL REAPING DEATH: steeped in the ancients, billowing sulfur, divebomb leads flying right and left, and the unhinged yet locked-in execution that can only come from true and total DIEHARDS. Not everything goes in death metal, and Hexorcist keep a closed mind when it comes to the Metal of Death. For them, the archaic ways of Morbid Angel, Necrovore, Sarcofago, Death, Incubus, Possessed, Vital Remains, Slayer, and Peru's Mortem do not need to be messed with, only upheld, and uphold Hexorcist do here. No more but definitely no less, Evil Reaping Death is 666% maniacal death metal for death metal maniacs - exclusively!