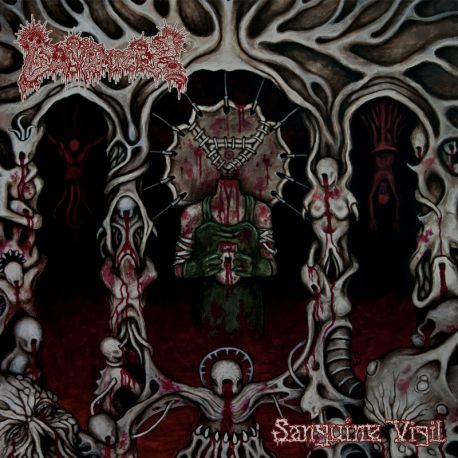 Jewel Case CD.
From the swamping lands of Finland death/grind trio Galvanizer emerges with their debut album "Sanguine Vigil" after having paid all their dues with several tapes and a 7"ep like we were used back in the 90s.
Galvanizer have quickly become one of the most promising underground acts around, their old school approach perfectly combines with their youthful energy and their sound will perfectly please both fans of old school finnish death metal and modern deathgrind sounds.
The artwork is painted by mighty TG Rantanen, a finnish institution famous for his works with Demilich, Demigod, Adramelech, Depravity and many more.

For fans of Xysma, Machetazo, Abhorrence, Haemorrhage.
Produced by Galvanizer
Recorded at Shed Studios in August 2017
Recording and mixing by Juha Matti Kauppinen
Recording help by Lauri Holm
Mastering by Matias Ahonen
All songs and lyrics by Galvanizer except "A Painful End For Curiosity" by Necrobiosis in the golden ages of total death
Cover Art by Turkka Rantanen
Layout by Galvanizer