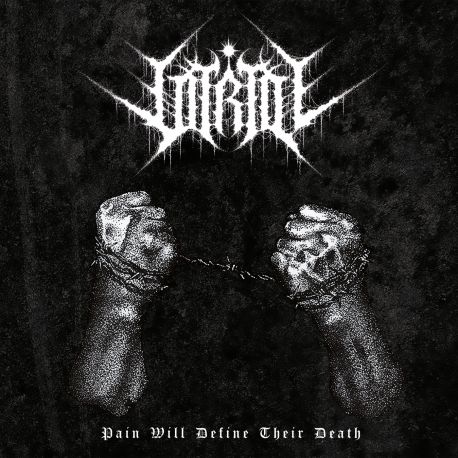 One of the most pissed off and corrosive expressions of Death Metal you will ever hear! Finally on physical format the critically acclaimed debut EP by Portland-based band Vitriol, MCD comes with an exclusive brand new track recorded during past sessions!

Racking up serious pre-release praise from within the metal media, "Pain Will Define Their Death" sets forth Vitriol's sound in no uncertain terms. Through the EP's four tracks, the Portland, Oregon band lashes out with a style rooted in the turn-of-the-millennium works of Morbid Angel, Hate Eternal, and Nile. Vitriol's three members – guitarist/vocalist Kyle Rasmussen, bassist/vocalist Adam Roethlisberger, and drummer Scott Walker – attack the hallowed genre with a fresh aggression that cannot be faked.
Dense, visceral, overwhelming, Vitriol's tornado of sound is familiar but new.

“Violence is the element that will always be found in any Vitriol song. Trivializing the human experience and shining a light on its frailty and natural cowardice… I truly believe that what we want to communicate and represent with our band is a universal truth to everyone. We’re trying to tap into something that everyone has inside of them.” (Kyle Rasmussen)
For fans of Hate Eternal, Nile, Internecine and Myrkskog.

Recorded by Derek Leisy at Audiosiege Engineering (Portland, OR)
Mixed by Taylor Young at The Pit Recording Studio (Van Nuys, CA)
Mastered by Stephan Hawkes at Interlace Audio (Portland, OR)
Logo by View From The Coffin
Artwork by Melissa DiMartino
Photography by Charlotte Little Wolf