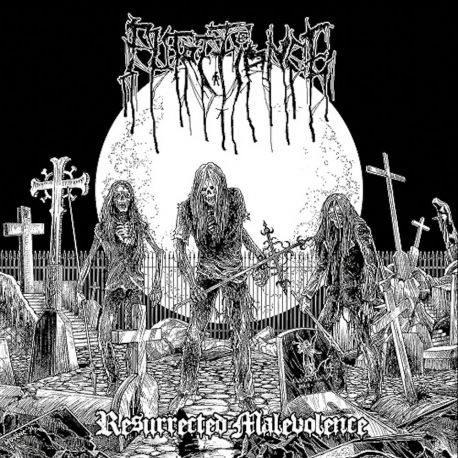 A CD that compiles everything this French band has released so far, namely the "Putrefiance" demo (2018) and the "Left to Decay" EP (2020). "Let´s play Death Metal". That´s how it all started by mid 2017, when two Death Metal freaks joined forces with a Crust/Punk drummer to summon the spirit of old school, raw and rotten Death Metal with a Punk vibe, inspired by icons of yore such as Autopsy, Master, Repulsion and Obituary. In July 2018, they entered Cripple Room Studio and recorded 7 original songs, plus an Onslaught cover. It was a live recording. The engineer worked fast, and everything was mixed and mastered the following week. Shortly after, they decided to gain a little exposure by putting the demo on the web. Small labels reached out to them, asking for a repress of the demo, and some great reviews spawned here and there. November 2019 came, and they went back to Cripple Room Studio to record the "Left to Decay" EP. There was a label that was supposed to put it out, but it turned out to be a total disaster. The release was delayed again and again. On top of that, the pandemic arrived in 2020 and that meant no rehearsals and no gigs. So, more than a year after the recording, they decided to self-release the EP on tape (it would be repressed on pro-tape later on). Next step for Putrefiance to take will be to start the recording of a full-length that will also be released through Memento Mori by mid/late 2022.